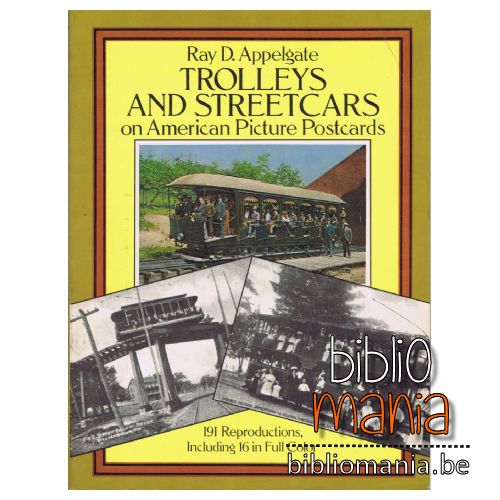 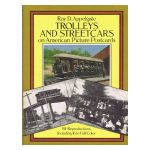 « 191 Reproductions, Including 16 in Full Color »
Broché / 88 pages / édition de 1979
langue(s) : anglais
éditeur : Dover Publications, New York
ISBN : 0486237494
EAN : 9780486237497
dimensions : 285 (h) x 212 (l) x 7 (ép) mm
poids : 327 grammes
DISPONIBLE
Tous les prix incluent la TVA
At the turn of the century, trolley-car lines were springing up in hundreds of towns and cities all across the country. They provided transportation in downtowns, connected city centers with suburbs, and even competed with railroads on many interurban runs. Proud of their new trolleys and their own progress, many cities seized upon another recent development  the picture postcard  to depict themselves and their vaunted new transportation networks. The postcard with a picture of trolley cars soon became one of the most popular kinds.

This unique collection, the most extensive of its kind, comprises 191 views  16 in full color  of trolleys and streetcars on American picture postcards. Spanning a total of 162 different localities in all 50 states except Alaska, plus the District of Columbia and San Juan, Puerto Rico, the volume pictures a wide range of cars and lines: primitive systems on just one street and sophisticated interurbans; horse-drawn, battery-powered, steam, gas, and electric vehicles; and such types as California, Vanderpoele, Barber, and "hobble-skirt" cars. Among the most impressive cars are: the excursion trolley Berkshire Hills, probably the finest parlor car ever made (Pittsfield, Mass.); the most beautiful double-decker ever to run in America (Coronado, Cal.); one of the most picturesque interurbans in the West, seen at its terminal in Coeur d'Alene, Idaho; and New York City's famous double-decker, the "Broadway Battleship."

Full captions for all the postcards indicate locality and state, name of trolley company represented and varied information including the trackage, type of car shown, printer of postcard, etc. The cards are conveniently arranged, alphabetically by state and, within each state, alphabetically by the locality actually depicted on the card.

Until the automobile rose to dominance in the 1920s, trolley lines provided an extensive network of public transportation with an efficiency that may have been taken for granted then, but is envied today. This inexpensive volume gives postcard collectors, trolley enthusiasts, and urban-transportation buffs the true flavor of the postcard and trolley era. And, since the photographs often give an interesting glimpse of main-street U.S.A. as well, this book will appeal to anyone who enjoys seeing small-town and urban America as they really were.